Uruguay suffer their second defeat in the road to Russia as an impressive Alexis Sánchez guides Chile to three vital points.

When Uruguay and Chile meet controversy is never far away. This time around, a heated confrontation was to be expected with the stakes being very high. ‘La Roja’ came in to the game aiming for a win, while Uruguay’s game plan would be to frustrate the opposition and trying to grind out a result. 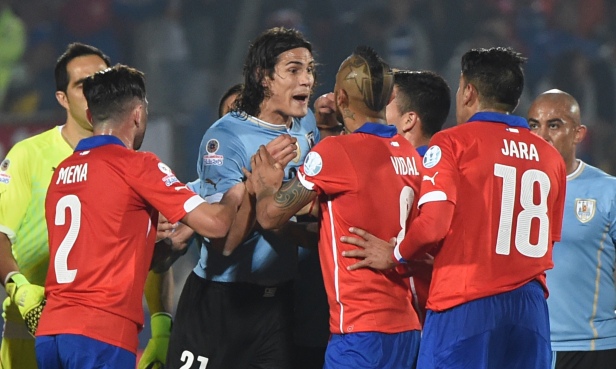 Chile started very insecure and wasted a lot of possession. It presented Uruguay with some big chances  and a clear penalty – which wasn’t given. The away side eventually capitalised as Edinson Cavani converted one of his many chances in the 17th minute. Chile then got some moves going, but never really found their rythm. At the stroke of half-time Chile did get their chance, though, and Eduardo Vargas made it count with a fine header. Uruguay paid for their missed chances.

The second half was completely different. In contrast to the first 45 minutes, Chile were more composed on the ball and had some spells wherein they imposed great pressure on the Uruguay defence. In the end, two moments of Alexis Sanchez – and poor goalkeeping by Fernando Muslera – were decisive and set the final score at 3-1. ‘La Celeste’ did have a chance to make a late comeback, though, as they were awarded a penalty. Luis Suarez effort was saved by Claudio Bravo. It just wasn’t his night.

Uruguay are still sitting comfortable in the second position with 23 points. But after the results of Matchday 12, there seems to be no more margin for error. Therefore, the upcoming qualifier at home to first placed Brazil will be big. Unfortunately, two key players in Fernando Muslera and Luis Suarez will be missing through suspension after accumalating too many yellows.

A very encouraging stat for Oscar Tabarez’ men is that Uruguay have never had more points at this stage of the qualifying campaign than they have now. Taking this in mind and looking at Uruguay’s remaining World Cup qualifiers, qualification for Russia 2018 still seems in no danger.