Uruguayan inside forward Héctor Scarone was one of the central figures in the national team which dominated international football through the 1920s.  During his international career, he won numerous major titles and set a national goalscoring record which stood until 2011.

Skillful on the ball and strong in the air, he was also one of the first South American players to make an impact at club level in Europe, having spells in both Spanish and Italian football during his long playing career. Héctor Pedro Scarone Beretta was born in Montevideo on 26 November 1898, into a family of Italian origin. He grew up playing football in open spaces near to his home, honing his skills by playing a ball through a hole in a fence. His first club was lower division is Sportsman, but at the age of 15 he had a trial with Nacional, one of the leading clubs in Uruguay and the team he grew up supporting.  Nacional initially turned Scarone down, on the grounds that they did not believe he had the necessary physique to make the grade as a footballer. He responded by working hard to develop his strength and after a second trial, did eventually join Nacional. After a spell playing for the reserves, Scarone broke into the first team in 1917 and quickly established himself as a key player, helping Nacional to a league title in his first season. He was called into the national squad for the first time in September of that year, making his debut against Argentina and then staying with the team for the South American Championship, which they were to host. In that squad he joined his elder brother Carlos, already an established international. Both brothers appeared in all three matches as Uruguay won the competition. Héctor scored two goals in the tournament to Carlos’ three, but in time it would be the younger Scarone who would be the more successful. 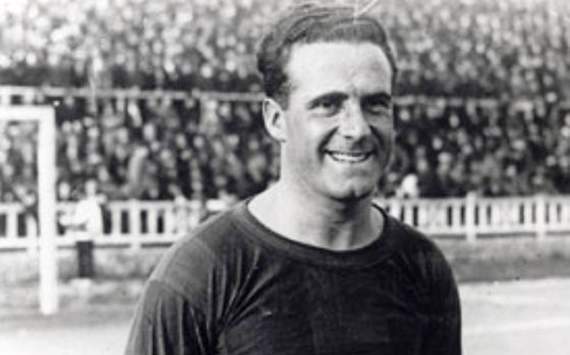 That championship would mark the start of almost a decade of non-stop success for Scarone at both club and international level. Between 1919 and 1924, Nacional claimed five more league titles in six seasons. Internationally, although Scarone missed Uruguay’s South American Championship win of 1920 he was a part of the squad that took the titles of 1923, 1924 and 1926. In the 1926 tournament, he was the second highest goalscorer with six in four games, five of them coming in a single game against Bolivia and taking him past his brother’s total of 18 international goals. With football at the time still largely amateur, Scarone spent much of this time also working as a postman in Montevideo. In the midst of that run of dominance of South American football, Uruguay had a chance to make their mark at a global level for the first time in the 1924 Olympic Games in Paris, the most important international competition in the world at the time. Scarone scored four goals in five games, including two in the quarter-final against France and a late winner from the penalty spot in the semi-final against the Netherlands. The only game in which he didn’t score was the final itself, but he still won a gold medal thanks to Uruguay’s 3-0 victory over Switzerland.

In 1926 Scarone moved to Europe to play for the first time, joining FC Barcelona. In his one season with the club, he helped them to win the Catalan league title and Spanish Cup before returning home to Nacional. Following his return to South America, he narrowly missed out on winning another South American title as Uruguay lost the decisive match to their great rivals Argentina. In a match where victory would have secured the championship, Scarone scored twice but a late own goal gave Argentina a vital 3-2 win. It was rumoured that Scarone’s decision to leave Barcelona had been taken to ensure he could play in the 1928 Olympic Games, which he would not have been able to do had he signed the professional contract he was offered in Spain. When the games in Amsterdam came around, Uruguay’s first match in defence of their title would be against hosts the Netherlands. He scored both in that game and in the semi-final win over Italy, to set up another crucial match against Argentina in the final. The match was drawn and went to a reply, and with the scores level at 1-1 Scarone scored what would prove to be the winning goal with 17 minutes remaining, giving him and his country a second gold medal.  Uruguay had secured their status as the leading team in world football, and Scarone had become his country’s record goalscorer with his strike against Italy taking him past Angel Romano’s record of 28.

That status led to Uruguay being chosen to host the first World Cup in 1930, a tournament which would prove to be Scarone’s international farewell at the age of 31. He missed Uruguay’s opening game against Peru, but in the deciding match of the group stage scored what would prove to be his only World Cup goal in a 4-0 victory over Romania, which took Uruguay into the last four. Wins over Yugoslavia and Argentina gave Uruguay a third global title, with Scarone one of four players to appear in all three winning teams. The World Cup final was his last international appearance, and his total of 31 goals for Uruguay remained a record until passed by Diego Forlán in 2011. Despite his international retirement, Scarone continued to play club football at the highest level, moving to Europe again in 1931 to join Ambrosiana-Inter (now Internazionale). After one season in Milan, he moved to Palermo where he stayed until 1934, ending his career in Italy in style with a goal in the final game of the season against Genoa. Returning once again to Nacional, he won another Uruguayan title in the 1934 season.

Scarone remained with Nacional until 1939, before finally retiring from playing at the age of 41 having scored more than 300 goals for the club. He went on to enjoy a brief coaching career, managing both Nacional and Real Madrid, where he spent a year as coach from 1951-52. Scarone died in 1967, aged 68.  His long-standing national goalscoring record ensured that he remained fondly remembered within Uruguayan football, and his legacy is further seen in the stand which is named after him at Nacional’s home ground.

This article initially appeared at http://www.world-football-legends.co.uk/.